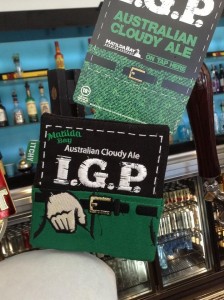 “We wanted to brew our version of a classic Australian Cloudy Ale — an easy drinking yet complex beer, with a naturally cloudy brew. And the name? Brewing is hot, hard work, the brewers work long hours in steel capped boots, safety glasses, industrial shirts and thick, heavy industrial green pants — which in the heat of the brewery can get a bit… well, itchy”. True story.

Tried this one on tap at Miranda hotel. Cool tap cover, they have actually used a really coarse, itchy material with the letter I.G.P sewn on.

Served in a standard pub schooner glass it pours a cloudy, almost freshly squeezed apple juice-like straw gold. The compacted white creamy head holds at about 1cm before settling to a thin cap on top, leaving patchy and spotted lace trails all the way down the glass. Quite a refreshing aroma, very hop-forward with wafts of pine, herbs, a touch of pepper and citrus. Maybe a hint of sweet malts in there too. Ultimately, very mild. Medium carbonation and delicately bodied in the mouth. Quite light on the palate and the flavour is subtle with a timid hop bitterness dominating upfront. Hints of lemon/lime, herbs, some pepper and subtle grassy notes also make up the body of this pretty standard Aussie pale ale. Only weighing in at 4.7% ABV so it’s pretty sessional. Not a lot going on with this beer but it was somewhat enjoyable on this sunny winter’s day. Just another standard pale ale.