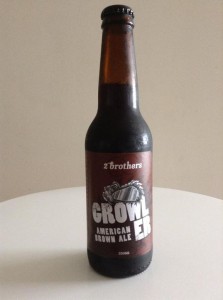 “Growler was the very first beer ever produced in our Moorabbin based brewhouse – batch 0001GRL. At that time, American Brown Ale was not being brewed anywhere else in the country. “The very first home brew trial batch of this beer was submitted for judging at the 2006 Cascade Brewer’s Guild (Seattle WA) Cascade Cup and was judged “Best to Brew” amongst a field of over 100 beers. Since then, our commercially produced Growler American Brown Ale has won several awards including a Gold Medal at Beer Asia Competition 2010.” Growler is a full bodied brown which presents a full crystal based malt profile combined with prominent hop character from US Cascade hops.

This little-known brewery from Moorabbin (south-east of Melbourne) can actually lay claim to a few respectable feats. A couple of cheeky awards and a collaboration with Feral brewing is just to name a few. Not bad for a little micro brewery from the picturesque Mornington Peninsula. Served in an English pint. Our relatively gentle pour manages to arouse a big 3 finger beige crown that takes an age for it to settle to its final well retained cap of at least 1cm. Thick lacing is strewn all the way down our glass. Solid roasted malts get things underway on the nose and as any good brown ale should, notes of chocolate powder, brown sugar, cocoa, subtle coffee, nuts and dark fruits are coming forward and giving this aroma a nice, decadent character. In the mouth it’s thick with a subtle creamy texture. Carbonation is low with medium body. The flavour profile initially offers up lightly roasted malts, chocolate and nuts. This trio carries forward through the mid and delivers a surprisingly mild finish with a muted hint of chocolate and light roast. The length is a little short and lacking the legs needed to be a memorable brown ale. The 4.7% ABV is about on par. Not bad, but a little too on the safe side, we would love to see a higher ABV and some richer coffee and roasted notes coming through, but in doing so, adds session ability to this ale. Just not big enough for us.