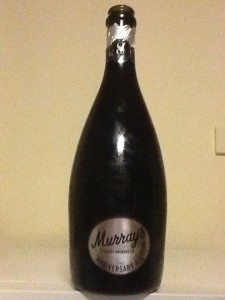 “This beer marks a milestone in our business, with the expansion of our brewing operations at Port Stephens,” said brewery owner, Murray Howe. “Our eighth birthday comes at a time when craft beer is really flying high. The craft beer scene is innovative, experimental and set for further growth in the years ahead. It’s a very exciting time.”

The Anniversary Ale series changes subtly each year but is always oak aged, always big and always a very limited release of 1000 bottles. Murray’s eighth Anniversary Ale goes back to its roots, reflecting the original recipe brewed to launch the company on New Year’s Eve eight years ago”. Fresh from Bobs Farm in Port Stephens comes this 750ml 2013 anniversary barley wine. Dark brown pour with a thin head and minimal lacing on show. On the nose we detect a firm waft of alcohol, oak and malt mixed in with scents of pine and citric grapefruit. Astringency aside, it’s actually warming and very rich with complex hints of dark dried fruits and some cognac undertones. This baby is 10% ABV and its evident in aroma and flavour. The carbonation is quite mild with a high initial bitterness on the front-palate. Stinging alcohol, gamey meats and ash in the mid-palate is completed by a dry, hoppy finish. No where near a sessional beer but a definite quaffer. This is only a seasonal brew so get down to Murray’s in Port Stephens and see their amazing range of beers.