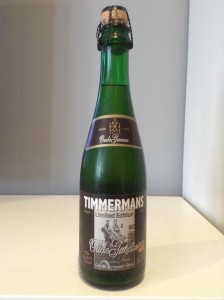 “Oude Gueuze is an appellation controlee : its label is protected. It is also known as the champagne of beers, especially as it is only available as a limited edition. Timmermans Oude Gueuze’s special flavour derives from its time-honoured method of preparation. It is a blend of old lambic, which has been aged for three years in wooden barrels, and young lambic which ensures spontaneous fermentation in the bottle. The different lambics are carefully selected by the brewer to obtain a perfect flavour. After it has been produced, Timmermans Oude Gueuze, which is refermented for four months in the bottle, continues to improve for 20 years.”

This is our first crack at a Gueuze (a traditionally Belgian blend with similarities to champagne and sours). Served in a tulip glass (could also be served in a flute glass) the appearance displayed a slightly hazy straw gold with a quickly diminishing head. No lacing at all. Initially off the aroma we picked up a very sour lemon. Additional funky wafts of farmyard, tart fruits and phenols underline just how unique this beer is going to be. Mouthfeel is very strange, highly carbonated and highly sour. Flavour instantly reminds me of sucking on a sour lemon warhead. Maybe some grapefruit and sherbert aswell. The saliva inducing sourness is nothing we’ve ever experienced with beer before. Good length and good body. Tart, acidic and astringent is the best way of summing this up. 5.5% ABV is hidden among the ridiculous levels of acidity here. Maybe we’re a little beer immature but this is a very acquired taste which I don’t think we’ve acquired just yet!