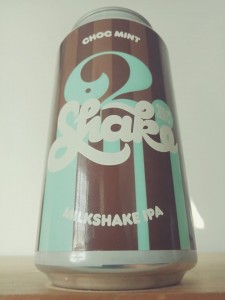 “For our fourth “Shake” release (brewed for Winter 2019) we decided to answer the cries of the fans out there and revisit our 2018 GABS beer – Moussey Juicy – albeit with a few tweaks and a new hop bill. Choc Mint Shake features a creamy base of oats, wheat and Munich malt, with dark crystal malts and lightly roasted malts intertwined with dutch cocoa.”

Aroma: There’s something herbaceous in there that we just can’t put our finger on…yes we’re playing silly buggers…this thing is emanating that much mint it’s ridiculous! Pretty safe to say it’s mint syrup as it comes across like mint sorbet. Getting the vanilla sweetness, chocolate and cocoa, and after dinner mints opening up as it settles.

Flavour: Lactose and creamy milkiness upfront that works great with the chocolate. Some hop bitterness but it’s subdued. The mint is like the flavour in a chocolate mint confectionary treat – a tad artificial but not overly sweet. It’s basically the dominant flavour, with the lactose, oats and chocolate giving it that desert like characteristic…just in a liquid form. We are struggling to detect apple (it states it in the ingredients list). If it’s there, it must be green apple but we’re unsure.

Overall: The aroma on this bad boy is amazing. The flavour though…hhmm not as vigorous. The coffee and blueberry milkshake IPA is still the benchmark of this series. Look it ain’t bad it just isn’t all that memorable as some of the others.