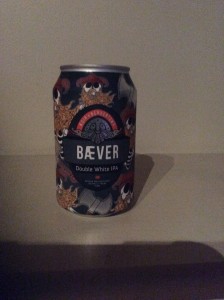 Picked this up from the very knowledgable owner of Oldfied Cellars Gosford. We can’t read anything on the label as its in Scandinavian but we love the graphics. We havn’t had many double white IPAs so Let’s rip in.

After popping the can we get that ubiquitous aroma of Belgian beer.. Banana, pear, musk, belgian yeasts and some booze. Poured into a schooner there is a hazy golden body full of yeast sediment with moderate carbonation. There is a big 20 mm white thick head which retains excellently..hardly budges. First sip yields almost exactly the flavours that can be smelt. More malted barley, clove, pear, almost a spice on the tonsils from the hops like white pepper and good bitterness which lingers well into the back palate. Flavours of citrus, and mild lemon notes. Mild caramels and as such there is a sweetness here that’s not cloying. Possibly some coriander herb here. The body is medium and there is mild carbonation in the mouth leaving a smooth velvety aftertaste. We note the Alc vol of 8% and like any well brewed beer its interwoven very nicely into the wheat malt and Belgian yeast. We would not know it’s an imperial by the taste. As we havn’t had many beers from this brewery we are interested to try a few more from their range. Nice offering.