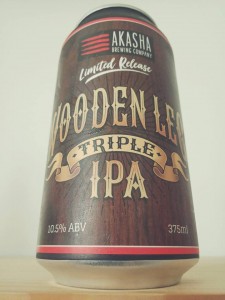 “The Wooden Leg Triple IPA is only brewed once a year for our birthday. This beautiful beast of a beer is full of Simcoe, Amarillo, and Centennial hops. Triple the hops, triple the flavour and triple the love!”

Appearance: Bright golden amber with a finger of tightly held white foam. She holds together well and draws a healthy lace as it ebbs.

Aroma: Right off the bat we get those Korben-esque, Simcoe-laden pine needles, mixed citrus and earthy herbal characters. Some florals getting amongst the orange citrus, pineapple and hop resins as well. The malt is well balanced…biscuity and semi sweet in delivery. These guys really know how to brew a top shelf IPA!

Flavour: Crisp pine and floral notes, mixed citrus for days, some earthy herbs and mildly dank weedy accents. The booze (10.5%) is quite prominent but at this weight it would be extremely difficult to mask. An assertive grapefruit bitterness tacks on to the warmth of the booze late in the piece and sets up the super bitter, piney and citric finish which endures on the back end.

Overall: For novelty and fun factor they’ve absolutely smashed it out of the park. We still think the Korben D is better though! That little bit of extra drink-ability has it pipping this at the post. Top drop though.