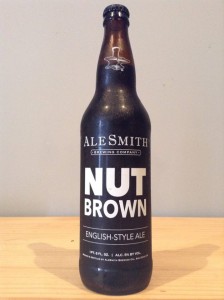 “AleSmith Nut Brown is a tribute to one of our favorite British styles. Deep mahogany in color, its rich, malt-forward flavor profile balances notes of biscuit, mild cocoa and earthy hops. A creamy mouthfeel and full body enhances its drinkability, making Nut Brown an extremely sessionable ale that embodies our commitment to quality.”

Served in an English pint. She pours a pecan brown with a finger of lightly tanned foam mounting on top. Gradual reduction, eventually settling to a fine film with scattered patches of lace sticking to the glass as we indulge.
Very traditional style on the nose. Quite rare from this quality American brewery as they would usually put a new world spin on it but this one stays true with a lovely earthy character that takes on the nutty malts, light toast, subtle coffee, tobacco and buttery toffee really well. They’ve nailed it.
The texture is light and effortless while the sprightly Co2 gives it an unsuspecting lift. A low IBU of 17 on top of a mild-medium body makes for a pleasant drinking experience. Very nice.
There’s a pretty smooth transition in to flavour here. A lovely assortment of nuts like almond, hazelnut and walnut take on a soft and subtle roast the carries across the mid. Traces of grain husks, caramel, earthy hops and mild bitterness wraps it up with a moderate length in the tail.
It must be tough for some American brewers to offer these kind of beers. What with products like the big 4 ‘C’ hops and many others who would want to brew traditional earthy, European inspired ales? Well these guys have…and they’ve done it brilliantly with its Newcastle brown ale-esque character. Solid beer with all bases covered. Another cracker from Alesmith here.