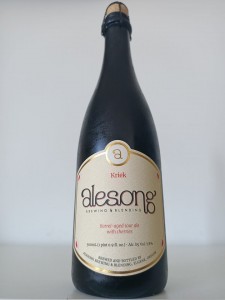 “It’s no secret that we take inspiration from Belgian Lambic brewers here at Alesong, and this quarter we’re sending a humble nod to their practices and releasing our own take on the classic Belgian Kriek.”

Appearance: Stunning strawberry red with soft pinkish hues. It constructs a short white head but it doesn’t take long for it to settle at the rim. Seeing OK lace despite the lack of head though.

Aroma: How good is Kriek?! It erupts with a kind of sweet yet kind of tart cherry. Loving the almost artificial berry sweetness which reminds us of either cherry or strawberry flavoured roll ups. Lots of tart plum and raspberry with more nuanced hints of cinnamon, vanilla and French oak barrels. Smells freakin amazing.

Flavour: Well tempered sourness initially which gradually moves in to the tart cherries and citric acidity. In and among all of that sweet and sour deliciousness is something a little earthy which really keeps it all nicely grounded. Not getting much from the oak barrels which is a real shame…just more cherry and raspberry in the finish.

Mouthfeel: Light spritzy kind of thing going on. CO2 maybe just a bit too lifted for us. Good acidity with a medium pucker – rates a 3/5. The 7.8% ABV is really well disguised.

Overall: Not the best Kriek we’ve tried but it’s still pretty damn good. The one thing that sets it apart from the likes of say, Cantillon is the depth and complexity. That is literally the only weakness here. Other than that it ain’t bad at all.