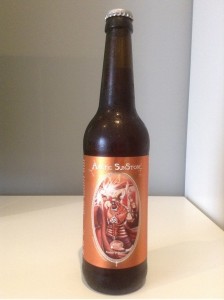 “The sunstone – much disputed among scholars. Did the Viking navigators really have such a tool that would help them point out what was east and what was west – even on a less than sunny day? We certainly believe so. Many years later no sunstone was needed when Amager Bryghus was invaded by what very much looked like Viking ancestors of American descent. Hailing from Munster, Indiana, Chris Boggess and Barnaby Struve of Three Floyds Brewing arrived not with a vengeance but with very loud King Diamond on their portable mp3 player. This was not a day for slaughter but for brewing. And brew we did. The mellow and dangerously quaffable Arctic SunStone is proof that even Viking warriors can have a more subtle side to them. All hail to Three Floyds. ”

The thought of Amager teaming up with the American brewing prowess of Three Floyd’s is simply tantalizing to the senses. Poured into an IPA glass (we like to do this from time to time as APA’s produce similar strength aroma’s as IPA’s). The appearance shows a deep cloudy orange that produces a frothy, mountainous three finger crown. Good head retention and good lacing. The aroma is brilliant, we love the use of famous Centennial and Citra hops which adds tropical fruity aromas such as grapefruit, passion fruit, pineapple and lychee that take the front seat. Hints of pine resins pair up with a subtle presence of apricot and it’s caramel malt base to create an impressive overall depth. Medium carbonation and bitterness (43 IBU) and a surprisingly smooth mouth feel. Full bodied, with a big vibrant hop bitterness upfront. Following on are bitter hints of grapefruit that blend into the sweet/fruity mid-palate, which in turn flows nicely onto the refreshing piney finish. Good length. 6% ABV is bang on. This is an absolute pearler of an APA, up there with the best we’ve ever had.