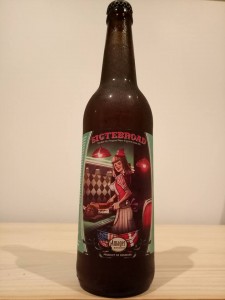 “It appears that the word “sigte” – in English “to aim” – can be taken back to the Viking era, where a “Sigtebrød” would be baked very hard as a substitute for a traditional longbow in areas where wood was scarce or even absent. After the victorious battle the Viking could then toast their bread bow on a traditional Anglo Saxon toaster. Illustrations of this bread bow have been found in several places in Ireland and Scotland, but not until recently did the confused archaeologists realize, what exactly was going on. Several hundred years later, Danish settlers in Minnesota brought the old Viking bread with them, and it soon gained widespread popularity. Also the bakery girls of blonde, Danish descent selling the bread, became popular to an extreme degree, and local Minnesotans soon nicknamed them “sigte broads” for their good looks. In some areas the baker even had to arm his sigte broads with a traditional Danish long knife to dishearten the most intrusive young, male bread costumers. All very weird, but indeed very true.”

Served in an IPA glass. Pouring a cloudy orange with a loosely packed head which inflates to two fingers before retracting to a rocky overlay. We’re seeing a wet and spotty lace clinging to the glass as it ebbs.
Definitely a lot of orange citrus character emanating. Slightly tangy, slightly spicy and a little tropical as a hint of citronella comes through. We didn’t notice it initially but the dry and bready undertones offer a solid balance and a bit of depth. Lots of grapefruit, citrus rind, mango, pine and lychee too. Impressive.
The flavour comes on nicely – juicy, tropical and citrusy with a firm spicy rye/cereal malt at the base. Like the aroma we’re getting more of the doughy malt as it settles but the hop driven notes of pine, stonefruit, citrus and grassy hops set up for a dry and bitter finish with plenty of length in the back end.
Creamy texture, nice and full in the mouth and perfectly carbonated. Well concealed bitterness and alcohol (6.8%) too.
Amager have always been a busy brewery but this recent project of collaborations with popular up and coming American breweries is really cool…..and genius we might add. We don’t see much of these rare American breweries down under so keep it coming guys!