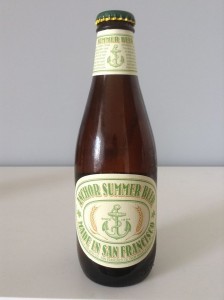 “Released each year in advance of the summer season, Anchor Summer ® Beer is an all-malt craft beer, with over 50% of its malt derived from malted wheat. It is fermented with a traditional top-fermenting “ale” yeast, yielding a clean, balanced flavor that highlights the refreshingly light flavor of malted wheat. The head is unusually abundant due to the natural protein deposits of wheat, with a thick consistency similar to meringue.”

From the bottle and served in a weizen glass the translucent golden pour whipped up a fluffy 1 and a half inch white head with good retention and lacing. From the outset the aroma is a little strange, we’re getting a dusty character from it. Subtle banana, hay and spice come forward but they’re heavily muted. Not a great deal happening here at all. In the mouth it’s smooth but it’s a touch too thin. Mild carbonation and very light bodied. Upfront, all we can detect is a soft hop bitterness on a weak malt base. Almost a sulphuric flavour in the mid which is quite distasteful. Finish is soft and watery, lacking any real flavour to pick up on. 4.5% ABV. Well, I think we’ll pour this out and forget it ever happened. Bland, flavourless and uninteresting. Real shame because these guys have brewed some nice beers.