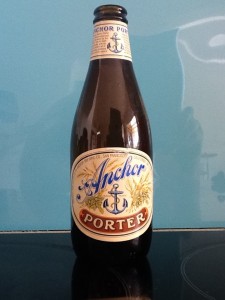 Every now and then we like to pass on the colourful history of some of the breweries beers that we try and this one just has to be told. In short the brewery was first purchased by a German immigrant in 1849. In the decades following, tragedies such as both owners passing away, fires, prohibition and earthquakes didn’t stop it as new owners came in and kept it alive. But as the age of mass-produced light beers threatened the brewery in the mid 1900’s, again, new owners came in and from there it was a slow and steady rise in to the craft beer age where it now stands as one of the longest serving craft beer breweries in the world. Amazing.

Now, on to the beer which we served in a beer tulip. The dense black beer arouses a big two and a half finger tanned head that retains well, finally settling at about 8mm with healthy lacing. Quite a sweet and sugary initial aroma. Plenty of dark malts, brown sugar, coffee, maple syrup, dark chocolate, toffee and ripe cherry are in abundance. A lot to like about this porter already. In the mouth it’s thick with a creamy texture. Carbonation is mild-medium and the body is medium-full. The way this flavour profile develops is excellent, it initiates with a slight malt sweetness and a mild hop bitterness cutting though. As it progresses through the mid a delicious roasted coffee flavour opens up and leads to the bitter and roasty finish. Really good length here, the coffee flavours seem to hang around for an eternity. Only 5.6% so the brewers have done well to provide so much depth with a standard ABV. Well, we guess brewing the same recipe since 1972 will do that….years and years of perfecting have helped create this delicious porter. We’d have to say this is probably our favourite offering from this brewery now. Really tasty beer.