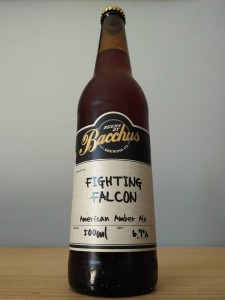 “This American style amber ale is crammed full of a propriety blend of American hops called Falconers Flight. The aroma and flavour is an explosion of tropical fruit and citrus. The rich malt backbone balances the hop intensity perfectly.”

Served in an English pint. Pouring a relatively clear crimson hue that dons a thumb of loosely packed bubble over the top. The head is retained quite well as it works a webbed lace pattern down the walls of the glass.
That nose is oh so sweet! Don’t know how he does it but Ross (head brewer) somehow brews beer that we just want to indulge in. This moreish sweetness that is leaping out of the glass is a blend of butterscotch, caramelized malt, toffee and golden syrup. Yep, you could literally pour this over your pancakes! We like how the feature hop (Falconers Flight) is used wisely with its subtle tropical fruit characters peeking through to balance out the malts.
The American character represents with its moderate hop bitterness. The texture is creamy with medium body. Slightly lifted Co2.
Definitely a much more balanced flavour profile. We get that caramelized malty sweetness coming though with this fruity and somewhat dry line of bitterness from the hops. It’s a little obscure but there is a faint hint of grapefruit that reveals itself midway. There’s a bit of a tussle between the hops and malts as it eventually finishes on a dry bitterness with a hint of nutty malt in the tail.
Definitely hitting its mark as it displays this kind of amber IPA character to it. We hate to admit this but as we’ve grown accustomed to such a high level of quality from Bacchus that when we come across a beer that doesn’t completely blow us away we get a bit complacent. It’s actually not a bad beer, it’s just no snickers ale, barosski or PBJT. Not bad.