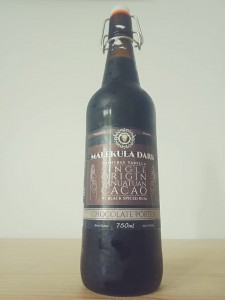 “Malekula Dark is Badlands Easter Offering. A London Porter spiced with single origin Cocoa from the Vanuatuan island of Malekula & Daintree Rainforest Vanilla soaked in “Dead Mans Drop” a spiced rum from award winning Bathurst distiller Stone Pine. The porter is brewed with 7 malts and is enriched by the chocolate and spicy rum flavours – then smoothed and mellowed by the world’s strongest vanilla grown in the Australian tropics.”

Appearance: Cola coloured pour with a short tan head resting atop. Retention is quite good and so it works a healthy lace down the walls of the glass.

Aroma: With all of those wonderful ingredients on display we were hoping for a bit more vitality. We certainly get the cocoa…it’s absolutely divine. The vanilla is a little harder to locate but it is there. Our main gripe is the lack of spiced rum which is the ingredient we were most excited about! Picking up a subtle peaty note along with tobacco, fresh leather and beef jerky as it settles in.

Flavour: It opens with chocolate, lightly roasted malts, subtle vanilla and tobacco. A flutter of peat and ash here and there as it rounds out on a mild roast with chocolate, toasted nuts and vanilla on the rear.

Overall: If this was advertised as a straight up London porter it would be superb but the feature flavours…specifically the spiced rum are muted and leave a lot to be desired. This bottle is quite old though so that could have something to do with it. Shame…could have been so much more.