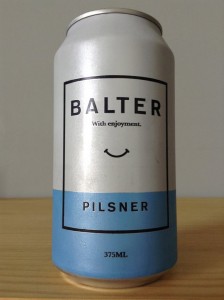 Served in a footed flute glass. She presents a lovely clear golden complexion with a frothy two finger head taking shape on top. It peels back to a collar with a reasonably good lace trail being left behind.
The aroma certainly has some lager qualities to it along with some of the more traditional pilsner characters like grains and honey as well. May be just a hint of peppery spice which leads us to believe that Euro Saaz and or Noble hops have been used. Undertones of straw, light florals, herbs and a subtle skunky note rounds it out. We’re a little undecided with this one.
Really nice and rounded mouth feel. Slightly mineraly in texture with good uplift from the Co2. Mild-medium body.
The palate definitely leans more on the lager side with a firm sweet malt and yeasty alcohols present from go to woe. Some hop spiciness comes through with a touch of floral pot pourri and a hint of that unpleasant skunky-like flavour in the finish.
We wanted to like it, we really did, but we were expecting more pilsner characters. We’re not entirely sure what pilsner category it would even fall in to as it doesn’t seem to be in Czech or German style. To us it’s more of a typical Australian lager. Sure it was crisp, bang-able and refreshing but it just didn’t win us over.