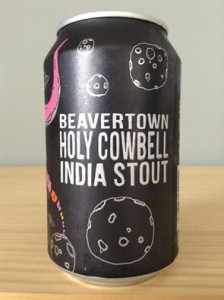 “The Bollywood of beers. We wanted to build a recipe which really pushed the love affair between dark malts and hops. So we designed the brew around allowing the hops to sing on top of a dark malt bomb. We aimed to brew an almost dark chocolate-like base beer and then piled on with the tropics of summit and centennial hops, lifting the waves of smooth chocolate off the tongue. We categorise Holy Cowbell as an India stout. ‘India’ coming from the same meaning behind ‘India’ pale ale. Basically lots and lots of hops added in their masses at the end of the boil and then in dry hop, to extract maximal hop flavour and aroma!”

Served in to a beer tulip. Pours an opaque black hue with edges of deep mahogany. A solid two finger crown forms on top which steadily reduced to a thick blanket that is retained well. Fine lacing. Although it’s named an “India stout” we’re pretty sure it’s just a fancy name for a black IPA, and that’s exactly where our thoughts are after the first whiff. The dank and fruity hops and pine work nicely over the robust malt backbone. Solid roast component coming through too, we get assertive wafts of charred wood, ash, coffee and heavily roasted malts. A subtle creamy undertone also provides hints of chocolate and cocoa as a spicy aniseed-like complexity plays out in the background. Very well layered aroma. Brilliant, really. In the mouth it’s thin in texture and a little watery over the tongue. The 60 IBU offers a vibrant bitterness which becomes crucial as the Co2 is slightly tired. To be honest it needs a bit more weight on the palate. The taste isn’t too dissimilar from the aroma. We get a delicious hit of roast upfront: coffee, malt and burned wood that blends pleasantly with the piney hops. Like a good IPA the aggressive bitterness sets in midway and carries well in to the finish. Great length here, flavours of earthy malt, chocolate, coffee and a subtle smokiness linger nicely on the rear palate. Pretty damn good drop from these Pommy craft brewers. One of only a handful who don’t just brew the standard English ale and porter but can nail an American influenced beer as good, if not, better than the Yanks themselves. Decent offering, we liked it.