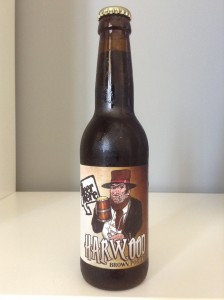 “In 17th century Britain beer was the drink of the common man. Wine was for the wealthy, tea was for the weak and water was usually quite poisonous. Men, women and children drank beer morning, noon and night. The most popular type of beer was porter because of its modest price and its nutritional value. One of the most popular porter brewers, and often incorrectly credited with the invention of the beer, was Ralph Harwood. This beer is inspired by the brown porter made at the time. ”

We have somewhat been on a Danish campaign lately, covering more than half a dozen beers from Mikkeller, Amager and of course Beer Here in the last couple of weeks. Poured into a shaker glass, this porter showcases a mat black appearance with a thin tanned head that peels away to a collar. Reasonable lacing being omitted here. The aroma is displaying a subtle arsenal of roasted coffee, dark malts, chocolate, and cocoa. A firm earthiness comes through with a suggestion of dark, dried fruits…either raisin or prune. Very faint herbal/leafy hop presence in here too. Brilliant aroma. Mild carbonation, medium bitterness in the mouth with a slightly oily texture. Upfront the palate, similar to the nose, displayed roasted characteristics of cocoa, roasted malts and grains leading to chocolate through the mid and a light chipotle style spice on the back end. Good length in the finish. 8% ABV, considering the strength it’s very well hidden. Highly palatable porter. Again, a very respectable offering from these brewers.