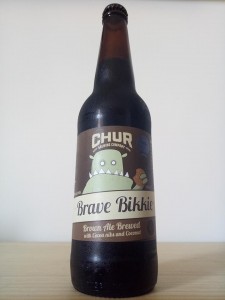 “Coconut, cocoa nib brown ale. This beer was originally brewed for Beervana’s festive beer 2014. We picked up a gold medal and best in class trophy for it. It has been described as a macaroon, a liquid lamington, a bounty bar in a beer. It is a desert beer without being too sweet. It was a crowd favorite and one of the biggest selling beers at Beervana again in 2015. This beer is not the easiest to make so we will likely only make it once a year (if that). So if you see one snap it up.”

Appearance: Deep mahogany which reveals a dark red hue when held to the light. It builds a huge three finger head that reduced and leaves a healthy lace clinging to the glass.

Aroma: Big and roasty with loads of chocolate, cacao, nutty malts and a hint of truffle. Absolutely loving the creamy coconut and vanilla bean, not only is it uber aromatic it also balances out those dark malty notes. Getting a slight suggestion of coffee in here too. Magnificent.

Flavour: We’d say it’s somewhere between a bounty bar and a lamington. It even has that light and fluffy sponge cake taste and texture. It may only only be a one trick pony but the chocolate, coconut and subtle roasty notes are thoroughly fulfilling. Excellent length on the back palate as well.

Mouthfeel: Smooth and aerated, light on and a little thin. Somewhat confusing though as it does hold up well. 6% ABV is nicely disguised.

Overall: A bloody decent drop. Not dense and rich enough to pass for a dessert beer but it’s still quite indulgent. Another impressive beer from this impressive Kiwi brewery.