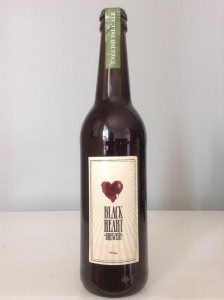 Picked this up from Purvis cellars while we were on a dirty boy’s weekend in Melbourne. This is actually the first time we’ve ever heard of Black heart brewery so let’s see how they shape up shall we.

Served in an English pint the slightly cloudy amber pour whips up a huge frothy 2 and a half finger head that settles to a well retained covering over the top. Thick bubbly lacing is trailing the beer down. The aroma is distinctly English and malt-driven with dominant wafts of toffee, fudge, nuts, pine and subtle grassy hops. We are also getting some biscuity/cereal malts coming through as well. In the mouth it’s frothy with considerably high carbonation initially which mellows off somewhere around the mid-palate. Moderately bodied. There is a slightly off-putting tart character which isn’t working with us to be honest. Fruity hints of pear inject some life into the malt-forward flavour while hints of nuts and sour cherries on the back end round off a pretty strange ESB. Quite cloying, it left us feeling a tad nauseous, we didn’t like it at all. 5.1% ABV is on par. Pretty average attempt at an English ale/ESB here. Not the best way to start proceedings, hopefully we bump in to a big, hoppy IPA next time we try one of their beers.