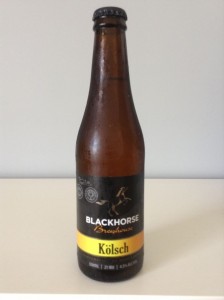 “You’d be forgiven for thinking an ale that comes from an inland German factory city wouldn’t be suited to our Aussie beach lifestyle. But you’d be wrong. Kolsch originated in the city of Cologne, and much like a cologne it has a distinctive aroma –  thanks to the type of hop; Tettnang. It has a light straw-like complexion and an equally light, easy to drink body – making it perfect for those long summer afternoons which into lazy evenings. Despite its German lineage, Kolsch gets along just fine with others – notably pork and fish”.

This is our first review of this brand new breweries range. The brewery first opened it’s doors to the public in early-mid 2014 and have a core range consisting of a Kölsch, Aussie (pale) ale, red ale, a stout and a seasonal. Traditionally the Kölsch should be served in a tumbler (a really small, roughly 20cl glass) but we don’t live in Cologne so we will serve this in a shaker glass. From the pour the transparent pale gold appearance knocks up a thin white cap that reduced to a halo around the edge of the glass. Some streaky lace trails follow the beer down. Our first thoughts of the aroma are grain, slightly funky lemon, wafer, grass and subtle citrus. In the mouth it’s light and airy with little fizz. The body is mild and highly sessional and the 4.5% ABV emphasises this. The first few sips yield plenty of sweet malts and grain. Once the beer starts to warm up, more savoury hints of corn and subtle lemon unfold delivering a soft, crisp finish. A very welcoming beer, not really pushing the craft envelope but no harsh or unwanted flavours, just a light, refreshing and highly sessional ale. A good start to this breweries range.