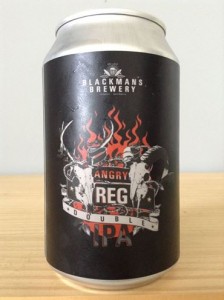 “Blackman’s have taken their Reginald IPA and sent it to the next level. Big, in your face and a little bit angry. Reginald was the brewers grandfather and was once taken to court by his own mother for throwing dinner at the wall!”

Served in an IPA glass. Angry Reginald pours a hazy deep orange/amber hue with a two finger overlay forming on top. The head maintains quite well, only peeling off a cm or so before settling to a fine film. He laces fairly well as we imbibe. We first tried this on tap at the brewery and we were blown away by how good it was…and that hasn’t changed a bit! Instantly the big, resinous pine notes fill the nostrils as a arsenal of fruits including grapefruit, passion fruit, mango, burnt orange, papaya and pineapple come gushing out of the glass. It all sits comfortably against the sweetness of the malt as well, handing it a toffee/caramel viscosity to fill it out. Brilliant. In the mouth it’s dry and slightly more aggressive with its prickly bitterness and sharp burn from the 8.8% ABV. Still somewhat light and flowing over the tongue and down the gullet though. Upfront the palate cops a bit of a bashing as big, resinous hops, alcohol and bitter citrus washes over. As it subdues a hint of sweet caramelized malt creeps in but it’s quickly drowned out by a vigorous hop dryness, bitter grapefruit and a sharp alcohol burn in the tail. Maybe it was the 6 pots we necked before it but when we tried at the brewery it was much more balanced in flavour. The aroma is absolutely superb but this time around the booze and bitterness were let loose to wreak havoc on the palate. Still, a great DIPA just a bit of fine tuning and this could be on par with your Pirate Life IIPA’s and Akasha Korben D’s.