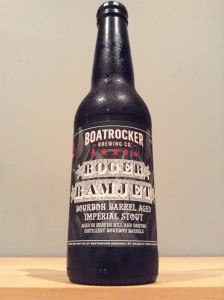 Served in a beer tulip. It pours like engine oil with a finger of loosely packed brown head forming on top. Rapid reduction, peeling away to a halo that posts a consistent set of rings as it ebbs.

One word for this aroma…pungent! It’s absolutely choc-a-block full of molasses, vegemite, bourbon, alcohol, vanilla,leather, coffee and earthy spice. Divine! It’s like a boozy, bourbon infused vegemite mud cake in our glass. We’d have to admit though, it just doesn’t have the brilliance that the whiskey barrel aged Ramjet possesses. Still, superb though.

It flows over the tongue with an oily texture that’s surprisingly higher in Co2 than expected. Nice warmth from the booze (11.2%) cutting through leading to a toasty bitterness in the swallow. The flavour profile is dead set delicious. A rush of sweet bourbon, cocoa, molasses and hints of vanilla gets things started. Bitter espresso and burnt chocolate notes are emphasized by the ascending alcohol warmth through the mid. It all hits a crescendo and levels off in to a rich, malty and decadent finish with a lingering warmth on a length.

It’s that good we could almost bathe in it. The rich malts, the bourbon characters, the coffee and the intermittent vanilla offering that creamy balance…brilliant. It exudes excellence. In no way is this a criticism but we still think the Ramjet falls over the line. Top shelf drop though.