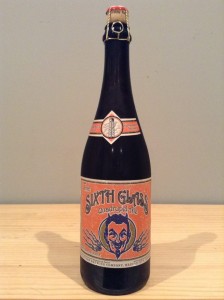 ”Do you know what dwells in a glass?” asks Ole, in Hans Christian Andersen’sThe Watchman of the Tower. Better known for stories such as The Little Mermaid, Andersen wrote this short, cautionary tale for a somewhat older audience. Our quadrupel ale, also meant for the mature connoisseur, is a deep and mysterious libation, dark auburn and full-bodied, its sweetness deceptive. As Ole describes the glasses in turn, their contents become more ominous until, in the sixth glass…”

Uncaged, uncorked and then served in to a wide rimmed tulip. The murky chestnut pour is complimented by a frothy two finger crown that retains brilliantly. As it ebbs a succession of wavy lace is left clinging to the glass. Exploding out of the glass are rich and complex aromas of banana bread, toffee, caramel, brown sugar, honeycomb, raisin, figs, clove and a subtle rum scent to top it all off. Outstanding! The fact that they are able to cram in so much character is one thing but to be able to have each and every character uniting like one harmonious hegemony is mind blowing. The sheer complexity and brilliance of this aroma simply has to be experienced to understand. So good! In the mouth it’s silky smooth and dangerously drinkable. We say dangerously because she weighs in at 10.5% ABV and it’s quite well masked. Co2 is spot on as it provides a slight tickle. Again, right on the money. A well rounded sweetness meets the taste buds as a spiky alcohol warmth along with stewed dark fruits shoot straight down through the middle. Subtle hints of candy sugar and port dabble around the mid palate as its lead in to a super complex finish with lingering hints of booze-soaked oranges, spice, raisin, plummy notes and boiled candy on the rear. Geez we tell you what this American brewery really has the Belgian Trappist style of brewing dialed in. Between the Long Strange Tripel and this there isn’t a whole lot that differs between them and the monastic brews they’re emulating. Very impressive drop here.