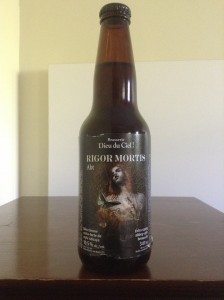 “Strong brown ale inspired by the beer brewed by Belgian Trappist monks. Very little bitterness, this beer has intense malty and sweet flavours, mixed with the taste of chocolate and caramel. It presents complex red fruit and spice flavours due to the type of yeast that is used during the brewing process. This beer is at its best only after it has aged for six months. The Rigor Mortis are complex beers designed and brewed with patience and care in the tradition of the great Belgian Abbey beers.”

Here we are back again for another installment from these genius brewers of Brasserie Dieu du Ciel. Master brewers that also have some pretty wicked strips showcasing some intricate, and in this case sombre, artwork on their labels. Served in to a wide-rimmed snifter. The mahogany/brown pour generates a very fine head and struggles to retain any of it, disappearing completely and leaving it headless. Such complexity is on show here. Characteristically, the rich caramelised aromas of fruitcake, prunes, raisin and brown sugar are emanating strongly but it’s the spicy and doughy wafts of gingerbread, mulled wine, clove/star anise and toffee with lashings of alcohol flowing through that really give this Quad it’s depth. Super rich. In the mouth it’s surprisingly silky with medium-full body. Not overly heavy like some quad’s which is making it much easier to drink. Mildly carbonated. The taste buds are also treated to an elaborate profile of flavours with a fusion of dark malts, prunes, ripened plum and caramelised sugars with a shot of alcohol warmth injected in. As this assembly moves forward, the alcohol sting fades and a more toffee-like sweetness comes through. A short return of alcohol warmth develops just before a rich, slightly fruity and most of all malty finish provides hints of cherry ripe, sour dough and plum on the back palate. Woah! the complexity and sheer volume of flavour in this beer is exceptional. Never are the flavours tangled or confused either, they all work in tandem, beautifully! This is a beer that is probably better drunk after it’s been aged. Preferably 3-6 months. Although, probably still just as good fresh. Top shelf stuff again from these French-Canadian virtuoso’s.