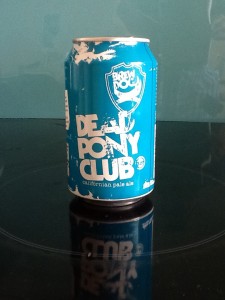 “PAYING HOP-FLECKED HOMAGE TO THE GLORY OF THE PACIFIC COAST, DEAD PONY CLUB HAS BEEN CRAFTED FROM AN INSANE AMOUNT OF US HOPS, DELIVERING MASSIVE CITRUS AROMAS OF LEMONGRASS AND LIME ZEST. Dead Pony is the invigorating surf that pounds the iridescent shoreline yards from the salt-encrusted asphalt of Route 1. The hop-heavy west-coast wonderland awaits. Dive in and the toasted malt base soon yields to a huge box-fresh hop hit, washing tropical fruit, floral garlands and spicy undertones all over your palate. Inspired by US-Style pale ales, Dead Pony is a low amplitude, high voltage hop hit; California dreaming for the craft beer generation”.

We love the idea of craft beer in cans…as long as it tastes good. This little gem from Scotland lads brew dog brewery is a ripper. Sitting at only 3.8% ABV, or 1 standard drink, this Californian pale ale packs a punch in terms of aroma! Poured into a tulip glass, there is that usual light copper glow with a foamy head that takes time to shrink down but doesn’t disappear completely. Beautiful pine and citrus aroma. The mouth feel is solid for such low ABV, with good carbonation and a nice amount of spice on the back palate. Nice soft touches of caramel, grapefruit, and tropical fruit-forward Citra hops. This brew is a great effort, given how well all the flavours combine. So floral for such a pale ale. Almost mistaken for an IPA . We have had far worse pale ales than this. This beer proves that craft beer can easily be housed in a can. I hope this comes in a 6 pack cause I’m buying for my next house party.