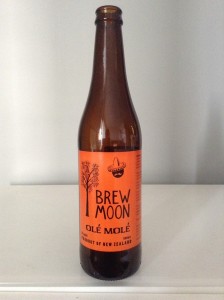 “Inspired by the famous and delicious Mexican dish “molè”. A rich caramelly (not dark) malt base overlaid by a combination of cocoa and other spices including chillies. Aromatic, spicy and warming. Olé!”

This is a strange one. From brew moon in nz, it’s a take on the Mexican dish ‘Mole’. It uses 3 different types of chilli to flavour and it certainly shows up. Served in a shaker glass the murky light brown/dark copper pour generates about a finger of tightly held foam which peels off hastily and settles to a thin film over the top. Laced poorly. The aroma of the beer is unusual..we get a solid fleshy waft of chili, peppery spice and a pleasant touch of cocoa initially. Soft caramel malt backbone that’s quite restrained but does creep through. There is high carbonation levels that provide a frothy texture in the mouth. The lingering initial sip is all chilli heat and peppery spice but it’s eventually smoothed out on the back of the throat with some light suggestions of cocoa powder and mild caramel malts. Unfortunately this is all that happens in flavour, no real depth here at all. In saying that, we were kind of into it but it was off-putting by the time we finished. Too unbalanced. If you dig Mexican food then this would tempt you purely out of interest, it just didn’t win us over.