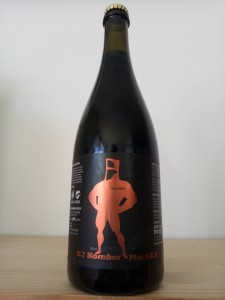 “Bridge Road Brewers reached its 13th year of brewing in 2018. We have continued the tradition of brewing a new yet bigger incarnation of the B2 now reaching Mach 8.0 The recognisable combination of complex dark malts, fruity Belgian yeast characters and big punchy hops remain, however, we have turned the dials up this year with the introduction of Corowa Whiskey.”

Appearance: Glossy black which reveals a faint dark red hue when held to the light. It forms a thumb of finely beaded foam which persists and decorates the glass as it ebbs.

Aroma: We don’t even need to bring it to our noses to get a whiff there’s plenty of uplift on this bad boy! As per tradition the 8th instalment brings a potent concoction of American hops, dark roasty malts, belly warming booze and a masterful touch of Belgian yeast. We do detect a minor variation though, it comes across as citrusy/tangy – blood orange perhaps? Jaffa? Cherry? Can’t quite put our finger on it but we like!

Flavour: Pow! There’s an intense rush of prickly booze, orange-infused chocolate, raw tobacco and what could best be described as Cointreau – although we’re inclined to say that’s due to this years addition of Corowa whisky. It mellows in to a nice and malty middle before it’s reignited with coffee, roasted malts, piney hops, citrus and a hint of those yeasty esters to finish.

Mouthfeel: Remarkably smooth, it sits at 11.5% ABV and they’ve done a magnificent job concealing it. Co2 is low with medium-full body.

Overall: Brilliant drop. It’s complex, it’s fun, it’s fierce and well marketed. We love how they make subtle changes to each years vintage as well. Big ups to Bridge Road once again. We’re already looking forward to the next instalment.