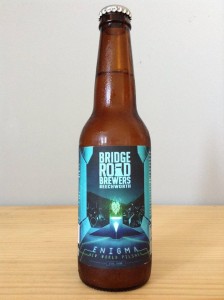 “This pilsner has been brewed as an Australian take on the craft pilsners of NZ. A light bodied lager heavily hopped with the Australian hop variety Enigma.”

Served in a footed flute glass. The pour offers a pale golden colour with a nice and puffy two finger head that eventually settles to a thick overlay which dispenses a smattering of lace down the walls of the glass.
We really dig this idea of the Enigma hop being generously used in a new world pilsner. Two reasons – one; it’s a direct descendant of the European Tettnang hop so its background fits in perfectly with the style of beer being brewed and two; it possesses a subtle but lovely citrus bouquet with traces of white grapes and herbs. The aroma also provides a mild earthy tone along with hints of hay and grains. Very nice.
The mouth feel is vibrant and mineraly in texture. The Co2 level is spot on and the body sits around the mild-medium mark.
The Enigma hop is showcased well in flavour too – especially upfront where the mild bitterness blends with the light citrus and herbs. The flavour of the hop holds up well across the mid as a slight grainy malt gets introduced delivering a crisp, dry and grassy finish that reveals a touch of hay on the rear.
Delicious pilsner here folks, a certain step up from their chestnut pilsner which seemed to miss its mark for us. The Enigma hop really is the champion of the beer with its lovely citrus sweetness and subtle herbal/grassy undertones. Lovely drop.