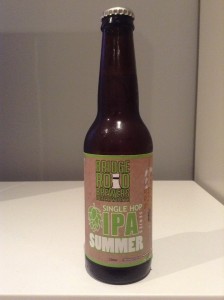 “Summer IPA is part of a series of single Aussie hop IPAs, with the Summer following the hugely popular Galaxy and relative newcomer Stella off the rank – and with the unlikely Pride of Ringwood IPA to follow. Summer is a hop variety formerly known as Summer Saaz and has been developed by Hop Products Australia. Those who’ve ploughed into the Galaxy and Stella IPAs will find this one much more subtle; don’t expect to be blown away by pungent aromas, instead it’s a gentler, floral aroma, slightly earthy. There’s a pretty full body too and a bitterness that works its way gently, but persistently, across your palate”.

What a great idea! Taking a leaf out of the Mikkeller book these guys have also released their own series of single, all Australian hop ales. This certain hop, being the “Summer” addition, being their 3rd in the series was poured into a shaker glass and showcased a clear and slightly dark amber orange. A thin and quickly dissipating 1 inch head fizzled away quickly. Minimal lacing. The aroma was quite creamy with dominant wafts of mango and orange. Some passion fruit, caramel and soft mandarin sat quietly underneath. Medium carbonation with a slightly oily mouthfeel. Palate was a little light on. Soft hops and citrus were evident upfront and also through the mid-palate and back end. Flavour dropped off quite quickly. Taste didn’t hold up to the higher hopes we had from the aroma. 4.8% ABV see’s this beer fit the more light summer sessional kind of IPA. Simple, yet highly drinkable.