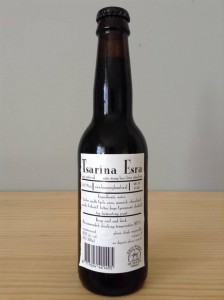 “Imperial Porter is a rather recent style that arose simultaneously in both Europe and North America. In fact it’s a stronger version of the Baltic Porters that were brewed in England for export to the Baltic countries. And Baltic Porters are in fact  stronger than the regular English Porter. To but it in short: it’s more of more. But they cannot be compared to their brothers the Imperial Stouts. They certainly have the same malty character but the heavy roasted malt is absent.”

Served in a snifter glass. The pour is pitch black with a compacted tan head that quickly peels back to a halo. Lacing is minimal. Quite a bit of suspended sediment floating around so go easy on the pour. The nose is rich and quite salty with wafts of molasses and soy sauce leading out. We get a kind of umami-like undertone annexing to it. A plethora of dark malty characters like chocolate, licorice, charred wood, whiskey and raw coffee beans fill it out. We’d have to admit, it’s quite unique…..and we like it! The mouth feel is surprisingly light and oily for a Porter of its size (10.1% ABV). To add to that is the minimal alcohol burn – very well contained. Low Co2, moderate bitterness and medium-full body. Dangerously drinkable. Upfront we get that slight saltiness on the lips. It has this uncanny similarity to soy soaked tuna sashimi. Something quite fishy and definitely salty here. As it warms though, a more molasses based flavour develops bringing dates, whiskey and charred malts to the table. A delicate alcohol warmth is eventually revealed as a slight suggestion of peat leads in to a long and drawn out finish that provides flavours of cocoa powder, prunes/raisins and coffee on the rear. Wow, at first we were a little apprehensive but this beast of a Porter has proved to be an absolute cracker. This hefty saltiness plays a critical role in boosting flavour but not overpowering, allowing the usual robust malts to shine. We’ve also forgotten the fact that this is over 10%! Hats off to these Dutch brewers. A delicious drop.