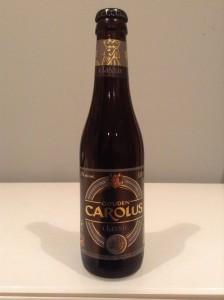 “The worlds best dark ale” is how the brewery describes this beer. This breweries’ story seems to be less about the hardship of wars, which a lot of the breweries in the Western European nations saw through, and more about the Emperor of the time and the beer that the chosen brewers brewed for him.

“Gouden Carolus” meaning Golden Coins in English is served in to a wide-rimmed chalice. The deep mahogany brown pour knocks up a beige coloured crown at about a finger and a half in height. The head swells then quickly recoils to a halo around the inner edge of the glass. Laced moderately. So distinctly Belgian on the nose. Very yeasty. Firm wafts of banana lollies, iodine, cookie dough, figs, cherry and clove/star anise are the dominant aromas while a faint scent of maple syrup and alcohol lurk in the background. Nice balance between sweet and savoury here. This beer has a very smooth, almost silky texture which offers mild-medium carbonation and minimal grip on the tongue. The 8.5% ABV is almost forgotten about its hidden that well. No sharp astringency whatsoever, just a well contained warmth that tickles the edges of the tongue each time we take a sip. Mirroring the aroma, the initial flavour profile is all about the yeast. Banana lollies and raisins produce a delicate sweetness which is well balanced by a presence of toasty malt. The mid forms a bit of a dark fruit complexity which in turn delivers this surprisingly smooth, malty finish with a trail of molasses on the back end. What we love about this brew is it’s similarity to other top shelf Belgian beers, but at the same time presenting it’s own character. We wouldn’t go as far as to agree by saying it’s the best dark beer in the world, but it’s certainly a damn fine brew. Very nice.