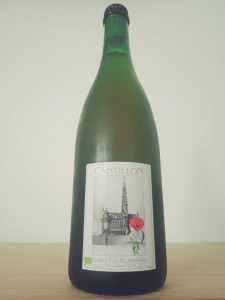 “Vintage lambic. All the beers are from the same brewing season and mature in barrels for three years. Beer with a highly complex structure that has a wine-like and somewhat oxidised taste, the slightly acidic structures mingling with more mellow aspects. Powerful yet elegant, Bruocsella can be considered the missing link between the worlds of wine and beer. Since there is no secondary fermentation in the bottle Bruocsella is a flat, non-sparkling beer.”

Appearance: Clear amber colour with minimal head and scarce lace as we go. It actually looks like apple juice in the glass.

Aroma: Tangy and slightly acidic apple cider-like notes with buttery chardonnay, sugar crusted apricots, candied lime and sour apple. Very mild hints of vinegar and barnyard working through the subtle woody oak. A flutter of that good old manky cheese getting amongst it too. Brilliant depth to this nose.

Flavour: Tart citrus i.e lemon and lime, straw and other farmyard grains, white wine and a soft peppery spice. It develops a bit of yeast derived esters such as apple and pear which set up for a kind of funky fruity finish with woody spice and manky cheese drawing out on the back palate.

Mouthfeel: Light on, dry, musty, mineraly….even a tad watery at times. It’s flat as a tack as well! Only 5% AbV. Almost wine-like.

Overall: It’s basically a sour wine. The concept itself is very intriguing…somewhat blurring the lines between wine and beer. We’d love to have a cellar full of this just to see how it would age as well as how it would pair with white wine loving dishes like shellfish, other seafood and white meats.