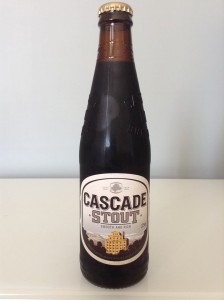 “Fatty Appleton, a colourful brewery worker, was known for his ability to carry 2 Firkin barrels under his arms (yes, they’re known as Firkins). It’s a skill that would work as ’crowd control’ when things got out of hand at the local. Deep and rich in colour, Stout has a slightly nutty roasted flavour and chocolate characteristics, with a smooth and creamy body and pleasantly bitter after-taste. Fatty Appleton would approve!”

Straight from the tanks within the oldest operating brewery in Australia which unfortunately like other big breweries in this country have sold out to a big conglomerate (CUB). It was exciting to see Cascade, a normally commercial brewery, finally branch out in to the craft beer market with a range of lighter ales along with this stout. Served in a beer tulip the jet black pour generates a 1 cm tan head that retains quite well, although settling to a thin layer that laced poorly. The aroma is pretty stock standard with roasted coffee, chocolate, nuts and a hint of peat dominating the nose. In the mouth it’s oily with low carbonation. The body is light on but not watery which is it’s saving grace. On the tongue the flavour is roasted and burnt with plenty of dark malts, chocolate, caramel, cocoa and grains coming through the strongest. Average length. Pretty standard stout, nothing overly aggressive happening. The 5.8% alcohol volume does add some extra kick, and considering Cascade haven’t really branched out into a crafty range before we thought this stout was good….. but nothing to rave on about. Not bad.