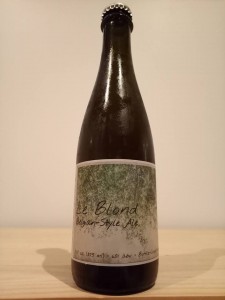 “We brew this Belgian-style blonde ale to satisfy our Cellarmaker wants and needs for a European hopped ale that is also light on malt like a pilsner. The restrained phenolics from the yeast add some depth without overwhelming the classic hop profile and a touch of spelt adds a subtle layer to the pilsner base. This beer is bottle conditioned but is not meant to age; that means drink it now!”

Aroma: It balances between the floral/fruity hops and the sweet Belgian phenolics. Getting strong wafts of rosewater, honey, clove and buttery crackers with hints of caramel, grassy/herbal hop, bubblegum and boiled candy in support. A rather sweet malt structure at the base…maybe slightly dry and grainy as well. Really lovely aroma, showing lots of depth and complexity.

Flavour: Playing a bit of Jekyll and Hyde here. The flavour profile is completely different, it’s much drier, it’s quite spicy and revealing a lot more hop bitterness. Certainly tasting the grainy wheat notes as they fuse together with the earthy hops and spicy yeast esters. It stays dry and finishes with subtle booze warmth, phenols and a mild hop bitterness in the tail.

Mouthfeel: Dry and somewhat chalky. Relatively smooth though with a hint of the 6% ABV coming through.

Overall: It’s a well structured beer but we’re still a little undecided. We like the distinction between the aroma and flavour but it was the actual flavour profile that lost us. It just seemed to lack that little bit of sweetness which could have balanced it out. Not bad.