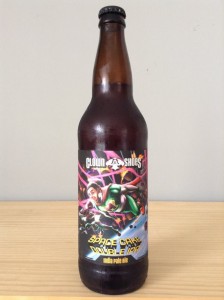 Served in an IPA glass. The hazy yet bright golden orange pour generates a rocky three finger head that only peels back a centimeter or so before settling to a thick overlay with tonnes of sudsy lace trailing it down. Very tropical on the nose. Lots of soft, fleshy fruit notes like mango, rock melon, apricot and paw paw erupting out of the glass. Very subtle citrus, pine and orange blossom come through with a delicate, sweet malt backing to fill it out. Booze is quite well contained for its strength (9%). Not bad, conservative aroma for an imperial IPA though. Into the mouth it’s sharp and astringent in texture with that ABV really coming in to play. The 90 IBU is represented toward the back end while the Co2 and body is medium. In contrast to the aroma, the front palate is subjected to an assault. A sharp alcoholic burn coupled with an aggressive bitterness is softened by a hint of tropical fruits and pine. A touch of sweet malt creeps in and transitions gracefully through the mid. A touch of citrus rind develops before an extremely dry and bitter finish rounds it all out with lengthy duration. A bit of a surprise package here. The aroma is mellow and pleasant before the palate is proper hammered. Still, for imperial IPA standards it’s certainly drinkable and it doesn’t blow your head off….completely. A solid way to return to Clown Shoes, it’s been a long time between drinks.