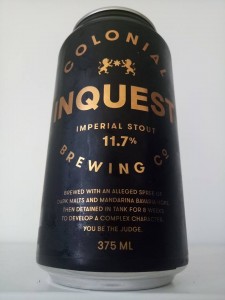 Served in a beer tulip. This beast pours as black as midnight with a finger of finely beaded foam forming on top. Reasonable retention, eventually settling to a film that weaves a webbed lace as it subsides.
Quite an interesting aroma here. It’s obviously rich, dark and gluttonous but the use of Bavarian Mandarina hops adds a certain lift. Just like orange flavoured dark chocolate. Deep-seated notes of coffee, cocoa and earthy spice seem to give way to the fruity hops a bit too easily. Tough to pan it though it’s pretty damn good.
Sonewhat staggered in its progression on the palate. It’s boozy (11.7%) upfront which transforms in to a kinda hoppy bitterness that is complimented by a subtle dark chocolate richness through the middle. The big stout notes finally come through, albeit a bit late with cocoa, roasted malt, licorice and leather. It finishes roasty and dark but slightly bitter with a hint of jaffa on the rear.
Creamy and somewhat frothy in texture. Medium-full in body with mild-moderate co2.
Definitely projecting from the left field here. Initially we liked the presence of the citrusy hops, then we went off them…but we came around again in the finish. It’s a brave addition to such a rich and heavy stout which only just came off for us. Not bad.