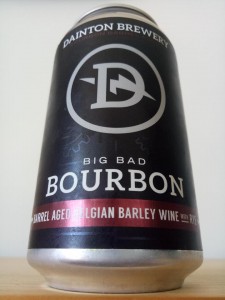 “Beer description: This beer is a bit mad, like us. And stupid, unlike us. Aged in three different types of bourbon barrels and brewed with a Belgian yeast. Tastes like vanilla, fights Ken.”

Appearance: Sort of copper sort of cherry red thing going on with an inch of loosely held bubble on top. The head quickly vanished and leaves nothing but a foaming island in the center.

Aroma: It’s unique that’s for sure. We’re putting that down to the use of rye, which with its spicy notes, slightly offsets all of those uber sweet and rich caramels, toffee, port and residual sugars. Definitely picking up the bourbon and woody oak accents as well, very nice touch. Some earthy spice, fig, gluhwein and apple/pear cider just to make it a bit more complex!

Flavour: Not quite as aggressive as anticipated. It comes on strong and warming but it’s nicely softened by the rich and smooth caramel, toffee and syrup. The earthy spice plays a good support role as it hits a sharp sherry/brandy note in the middle. Clove, stewed oranges, bourbon, residual sugars and fortified wine finishes it all off.

Mouthfeel: Oily and somewhat gelatinous. The 14% ABV provides a hefty warmth but that’s to be expected.

Overall: Not bad. Probably one we wouldn’t seek out again but in saying that it’s seriously complex and very comforting. One to crack on a cold winters night we reckon.