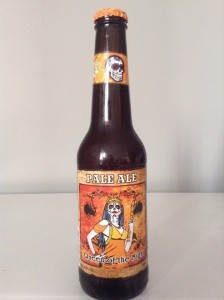 ‘Dia De Los Muertos’ or Day of The Dead in English marks a popular day in Mexico where they literally…celebrate the dead. One thing that is no longer dead in Mexico is craft beer. These brewers seem to be the only shining light among a drab and insipid range of beers such as Corona, Sol and Dos Equis. The name may be a tad morbid but there’s hope on the horizon for Mexican craft beer drinkers.

Served in a shaker glass. The clear copper pour manages to arouse a finger and a half’s worth of tightly packed beige foam which is held nicely. Head retention is good, omitting wavy lace patterns as it ebbs. There’s certainly a pronounced maltiness to the nose. Lots of honey and caramel sweetness that’s laced with floral hops and and ripe, fleshy fruits like mango, papaya and paw paw. It’s much more subtle but we do detect a kind of doughy/bready aspect in here too. not bad on the nose at all, it comes across slightly like a cheap floral perfume at times but all in all it’s pleasant. In the mouth it’s really light on. Smooth but with a slightly thin texture. Co2 is moderate and the 4.8% ABV expectedly makes no appearance. What is lacking, unfortunately, is a firm hop bitterness. Mellow as from the malts but next to no dryness from the hops. We get a little malt sweetness upfront which is followed by ripe stone fruits through the mid. A slight descent of flavour ensues as it fades in to a short, floral hop finish. A little disappointing in the end. On the upside though, if we were presented with a choice between this or a Corona we’d be tripping over ourselves to get our hands on this. It isn’t great but it isn’t terrible either. Middle of the road at best.