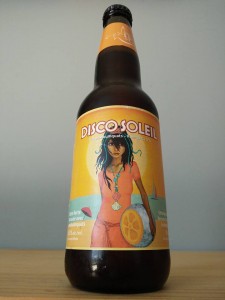 “Disco Soleil is a Canadian IPA by Dieu Du Ciel brewed using kumquats. In the glass, Disco Soleil pours an attractive honeyed gold with a lasting, creamy white head. The nose is fruity with fresh, juicy citrus scents colliding with peach, herbal and floral hops fragrances. On the tongue, the palate retains the same hops freshness but builds on the theme with more tropical notes including kumquat, mandarin, orange, and exotic fruits. There are also pine and herbs in evidence before a fine bitterness emerges in the finish.”

Served in an IPA glass. Somewhat hazy amber/orange hue meets the eye. It doesn’t construct much head as it struggles to produce a finger that weaves a remarkably healthy lace as we imbibe.
We’re seeing quite a lot of these fresh fruit flavoured IPA’s lately but this is the first time we’ve seen the kumquat being used. This particular fruit is part of the citrus family and tends to produce sweet but at times tart and tangy aromas – exactly what we’re getting off the nose. Sweet, juicy and tangy tangerine-like notes are filled out with a doughy/bready malt structure. Simple yet so effective.
Lovely crisp texture in the mouth. Mild-medium body with an assertive hop bitterness. Just a subtle lick of warmth from the 6.5% ABV.
The brewers have done an outstanding job bringing the subtle nuances of kumquat to the fore. Hints of juicy orange citrus blend with the super subtle tart features. The bitter citrus really kicks in to gear midway as the piney and lemony hops lay down for the hallmark American hop characters like grapefruit and passion fruit to shine. Any flavour of malt is minimal as we’re led to a dry and bitter finish with good duration on the back end.
It has been a long time between drinks for us and Dieu du Ciel. Although this release hasn’t blown us away like some of their other beers it’s still jam packed with a respectable amount of aroma and flavor. Would we seek it out again? Probably not, but on its own merits it is a bloody decent drop.