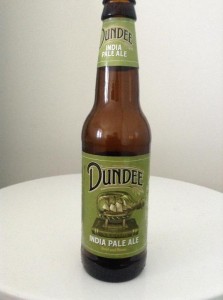 This IPA is one of those bottles that we always seem to pass on. Whether it’s the tacky, green label or the thought that crocodile Dundee himself may have traded the outback for his very own piece of brewing glory, either way we decided to have a go. Served in an IPA glass the golden amber pour produced a 1 finger white head that retains well. Good lacing. There is some suspended sediment too so watch your pour. The aroma immediately reminds us of an English style pale ale – malt forward and earthy. What bitter and citrusy aromas we can gather are subtle hints of apple, grass and pine but the caramel and biscuit malts dominate too easily. This is an IPA in serious need of late or dry hopping as the Amarillo and Simcoe hops should be front and centre. Mouth feel is dry and frothy with medium carbonation. Medium body. A good overall presence of aggressive hoppy dryness in the mouth but its the same problem as the aroma. This is marketed as an IPA but its coming across as an English style pale ale. Caramel malts, grain and faint earthy notes aren’t what we were looking for in an American IPA. 6.3% ABV. Some flashes of an OK beer here but it’s essentially confusing and dull. We won’t be going back for another in a hurry.