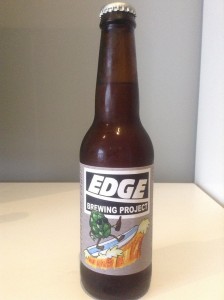 “Cool Hops Lager (Ranked best pale lager in the world, 2014 ratebeer, and highest score in category, Craft Beer Awards 2014) is the only permanent release from EDGE, with a handful of limited releases available at any given time.”

Gypsy brewers Adam Betts and Christian Skovdal Andersen of Edge brewing project in Melbourne, VIC are probably one of the most well known, small scale micro brewers in Australia. This lager is their only permanent release but there are a few other seasonal’s and collaboration beers that they brew when “desired”. Poured into a shaker glass. The appearance displays a cloudy amber/orange with a tightly held 1 finger cap. Good head retention and lacing. Off the nose we get a good balance of cereal grains, spice, grassy hops and citrus. There’s a subtle and overall nutty earthiness that does add some depth and extra dimension to the aroma. Mild-medium carbonation with a silky soft mouth feel. Medium bodied. So evenly balanced throughout the whole palate. Subtle hop bitterness, citrus, biscuity malts, grain and caramel all mingle together to produce a very well rounded and super sessional lager. Big ups to Edge for putting out this highly palatable offering. We really liked it.