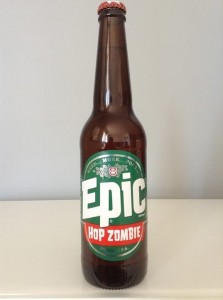 “Hop Zombie was arguably New Zealand’s most successful craft beer release of 2011. With its invasion, Epic continued to push the hop envelope. Ravaging hordes of craft beer drinkers scoured the shelves of every bottle they could find, hunting them down via word of mouth and social media in what one could only compare to preparation for a coming apocalypse. Unfortunately, the supply of top secret special hops for this highly aromatic beer were exhausted – not only at the brewery but on the whole planet!! No one had any. Not only had the hops run out, but the next year’s crop had also been fully pre-sold. No Hop Zombie until 2013!!! Noooo!!! The guys at Epic Brewing Company just couldn’t accept this. They spent months scouring the earth, trying to find these highly desirable and aromatic hops. A small amount of the elusive hop, grown in Washington state in the USA, was found hiding in a sleepy corner of the UK. They were quickly air freighted (don’t tell the bean-counters) to NZ to brew another batch of palate infecting Hop Zombie. Yes, the rumors are true, Hop Zombie is back!”

These kiwi tsar’s of brewing have brought the maximus lupulus for this one. Served in an IPA glass the translucent  golden pour is boasting a handsome orange tinge,  producing a fizzy, one and a half finger off white head with good retention. Laced well. Aroma is obviously big on the fruity and resinous hops, the dominant aroma for us is lychee. There is also a slightly citric background, offering lemon and a subtle additions of tropical fruit and grapefruit. In the mouth it’s smooth and silky with mid-high carbonation. Medium-full bodied. Taste is quite similar to the aroma, only a good whack of hop dryness separates it. Again plenty of lychee, booze (8.5%), hops, pine and mango on the palate. Crisp, bitter finish with a hint of caramel to slightly mute the big presence of hops. Very well rounded beer, the fore and after flavors all seem to marry together so well. Big ups to this brewery. Epic IPA!