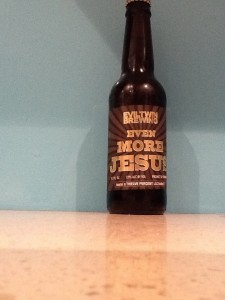 “A few times in the history of craft beer it has happened that a highly praised beer rises beyond mortal stardom into a higher godly league. Usually the recipe to make such heavenly drops is thick fudge-like body, pitch black color, amazingly overwhelming aromas of chocolate, coffee, dark fruits and muscovado sugar, obviously only made in limited amounts and most crucial of all – it must taste rare!”

What can we say, we were warned by our good mate at the Oak Barrel to proceed with caution and that’s what we will do. We served this ominous looking stout in a beer tulip. The thick and potent looking pour appears blacker than the ace of spades. Presenting itself as dense as motor oil, you would be right to expect the minimal brown head to disappear instantly leaving without a hint of lace on the glass. On the nose we detect an aggressive and hearty mix of dates, dark chocolate, oak, whiskey, vanilla, seaweed, molasses, leather and alcohol. Definitely not for the faint-hearted. In the mouth it’s thick with an oily texture. Very mild carbonation with mild-medium body. As to be expected though, the flavour is quite heavy. Upfront it’s very syrupy with firm tastes of molasses, chocolate and vanilla following it through the mid-palate. A slightly soothing hint of biscuit is enjoyed late before an astringent boozy finish leaves a smoky finish on the back end. There is a strong presence of alcohol (12%) which is akin to an alcoholic chocolate mud cake in a glass. Two words can sum this dangerous stout up…hostile and perilous. To re-phrase, proceed with caution.