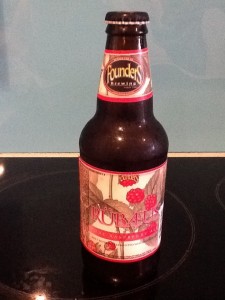 “Not another boring summer wheat beer or lemonade shandy—Rübæus is Founders’ way to celebrate the season’s warmest months. Optimizing the flavor of fresh raspberries added at multiple stages during fermentation, this stunning berry red masterpiece is the perfect balance of sweet and tart. No question about it, this beer is 100% Founders”.

This fruit flavoured beer from the wonder brewery, Founders is a little strange. It has a mild malt/raspberry nose and pours with no head or lacing. Looks like a Lambic but it’s like drinking a snakebite. Bright red colour with a soft pink hue…as you would expect when brewing with raspberries. There is really no other flavour other than sweet raspberry, not the fresh kind though, a bit artificial but not overly sweet…kind of subtle. Maybe a little tartness. Slight malt characters initially on the palate but other than that it’s raspberries and more raspberries. The 5.7% ABV is well hidden. No depth at all. Basically this beer is a chicks drink without any real flavours of beer. Stick to the rest of the beers this brewery produces. This is horrible.