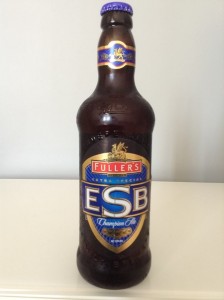 “By the time ESB launched in 1971, breweries had long been in the habit of producing an ‘ordinary’ bitter and a ‘special’. Our special was the irreplaceable London Pride so we broke the mould and added a pioneering third style: an extra special bitter, brewed to a stronger 5.5% ABV. Since then, ESB has gone on to become a recognised beer style, imitated in breweries right across the world.”

With a clear tawny/copper pour comes a short off white head that peels away to a very fine covering on top. Laced poorly. Off the nose we picked up a phenolic mix of toffee apple, plum, biscuit, maple syrup, sour dough, eucalyptus, fig, tart berries and dates. Quite a jumbled aroma but it somehow works. Mild-medium carbonation with a super smooth mouth feel…brewed perfectly for mass consumption in English pubs, although the 5.9% ABV may even knock over the burliest of Pommy punters if he gets a little light handed. Plenty of character in the flavour though. Dark, nutty malts, toffee, spice, toast, apple and some raisiny notes complement a very well-rounded and slightly complex beer. Never lacking in flavour but maybe a little one dimensional as there’s no progression of flavours being presented. Not highly sessional but a delicious sipping beer. This is a distinctively full bodied ale with some real character. Probably one of the better English bitter’s that we’ve tried. Good drop.