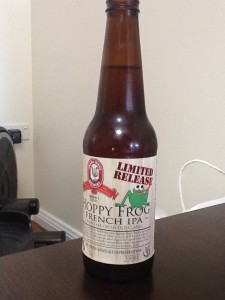 “A new take on an old classic, the Hoppy Frog combines the best British malts with French hops to create an IPA with a difference.
The well regarded Maris Otter made up the bulk of the malt bill to replicate the golden ale that sailed around the Cape of Good Hope to quench thirsts in India.
Multiple French hop varieties including brand new Triskel, were used in generous additions. The result is a unique floral aroma with pleasing lemon overtones and a gentle yet assertive bitterness.
Hop in to it!”

Here we have a limited release from Grand Ridge, Vic. We’d have to admit, it’s the first time we’ve actually seen a limited release from Grand Ridge. Let’s get cracking. Pours with a nice finger of creamy head that swells and eventually settles to a fine layer with some healthy lacing on the glass. There is suspended sediment all over the place here floating around due to the high carbonation going on. We easily pick Maris otter malts on the nose and palate. Typical amber colour but on the lighter side. There are French hops but the highlight is the inclusion of a brand new hop called ‘Triskel’. There are mild citrus overtones. The IBU is not stated but must be low, a bit more aggression from the bitterness would have been lovely. All we really get is a cameo of drying bitterness about 5 seconds after a swig. This brew is 5.2% so you could have a couple of these before you needed a new flavour in the mouth. We’d like to see more of these limited releases. Not a bad beer, but nothing overly memorable.