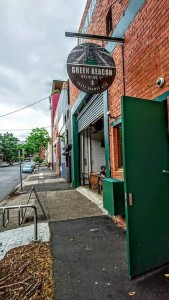 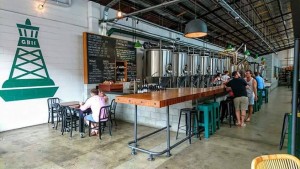 Ask us if we would prefer brewery or pub and before the question had even finished being asked we’d be resolutely projecting out a solid ‘brewery any day of the week’! One of the main reasons behind our vehement opinion would have to be the underground and non-commercial feel that brewery bars all seem to possess. Beside the fact that they also have great atmosphere, great beer, delicious food and appeal to a niche crowd they are almost always situated in either a really rustic, transformed building or a warehouse of some sort. That’s exactly what we loved about this brewery. Our final visit on our Brissy brewery tour brought us to the industrial suburb of Teneriffe. Behind the wide roller door is a traditional 19th century style warehouse with its high slanted ceiling and single row of industrial glass slated windows that allow in a good amount of natural light. Running down the right hand side of the place is a set of wooden tables and chairs while the left side displays the impressive line up of stainless steel tanks. The elongated bar runs parallel with the tanks with 3 separate sets of 4 tap systems. Their range is quite extensive, ranging from their Kolsch, Witbier, Pale Ale, IPA, Amber Ale, Porter and a seemingly endless number of seasonals. Unfortunately the Kolsch wasn’t available and we aren’t fans of Witbier so it was straight to their flagship Pale Ale which was easily the standout. It was delicious, hoppy, fruity and well bodied with a decent bitterness to back it up. The Amber ale was standard – nutty and malty with caramel undertones while the the IPA was nice, nothing overly aggressive – sessional and very palatable. We finished on the Porter which was roasted with light chocolate and coffee notes. Other than the pale ale, the beers were good enough to enjoy but they were lacking that wow factor. Points for atmosphere and general vibe of the place and a mention also has to be given to the quirky things for sale such as beer soap and beard oil for the hipsters. Let’s finish by saying, if we had this as our local watering hole we’d be more than happy. A decent way to finish off our Brissy brewery tour.