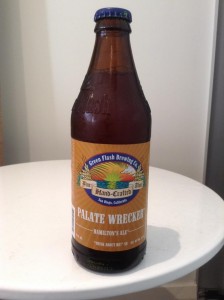 “Weighing in at six pounds of hops per barrel, Palate Wrecker® stands up to the hoppiest heavyweight in the ring. A complex double-brewing process of mashing and sparging with hopped wort and special hop layering are the techniques used during a hop crisis define this champion. An abundance of Centennial, Columbus and Simcoe hops challenge and stun hop heads with an aggressive hop-forward attack. Your palate will recover, but you will remember that last round forever”.

We’re absolutely loving this brewery! Situated in San Diego, California – right in the heart of the American West Coast IPA revolution where some of the best high-alpha hops originate. Instantly from the pour we knew this would be an exceptional beer. Served in an IPA glass it pours the exact colour we love our IPA’s to pour, with a slightly hazy, deep orange and a well retained off-white head that draws healthy lace trails. From the aroma we got big bittering hops offering loads of grapefruit with pine, spice, orange peel, pepper, caramel and a hint of alcohol. In the mouth it’s sharp with spiky carbonation. Full bodied. The flavour is where it’s at. Massively hopped throughout the whole palate with loads of grapefruit, citrus, stinging alcohol, zesty orange and a lingering aggressive hop bitterness that really draws out the length. Very minimal malt flavour but a mild caramel sweetness really struggles to gain any traction against the immense hop bill. Quite high in alcohol (9.5%) but in no way does it interfere with the flavours. Only adds to it. Brilliant Imperial IPA, they have succeeded here…our palates have been wrecked!