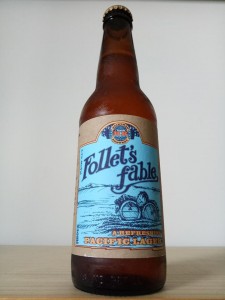 “In July 1791 while exploring the Hawkesbury River system, Matthew Follet’s small boat became separated from his companions. After days of frantic search, they found him on a river bank far down-stream, bedraggled, red-eyed and with a shocking story. He had been passing through a wild, narrow gorge when a monstrous ‘Hairyman’ had descended on him and forced his boat against the rocks. Follet had hammered the bugger, but with the vessel fatally holed he had just one option: two barrels, lashed together and emptied of their contents (the expedition’s ration of cool, clear satisfying Pacific Lager), had made a crude but effective raft to escape on. In view of all that Follet had gone through, it was thought best to cut short the expedition.”

Appearance: Crystal clear straw golden complexion. A finger and a half of creamy white head forms before reducing to a healthy overlay. Some patchy lace sticking to the glass as we go.

Aroma: Basic lager nose but it’s super clean and enhanced by a delicate citrus hop profile. The malts offer hay, cereal and grains with a somewhat earthy undertone – again delicate and very well tempered. So simple but so well executed.

Flavour: Really well balanced upfront, we taste a gentle wave of citrus washing over the tongue. There’s a nice addition of grainy malt and peppery spice also coming along for the ride. Hitting a slight earthy note midway before rolling in to a kind of woody, semi dry finish. Fairly decent length provided on the way out.

Overall: It’s not breaking any sound barriers but we get the feeling it’s not meant to. It’s simply hitting its mark with precision. Probably one of our least favoured styles but this one we can dig. Just a solid craft lager.